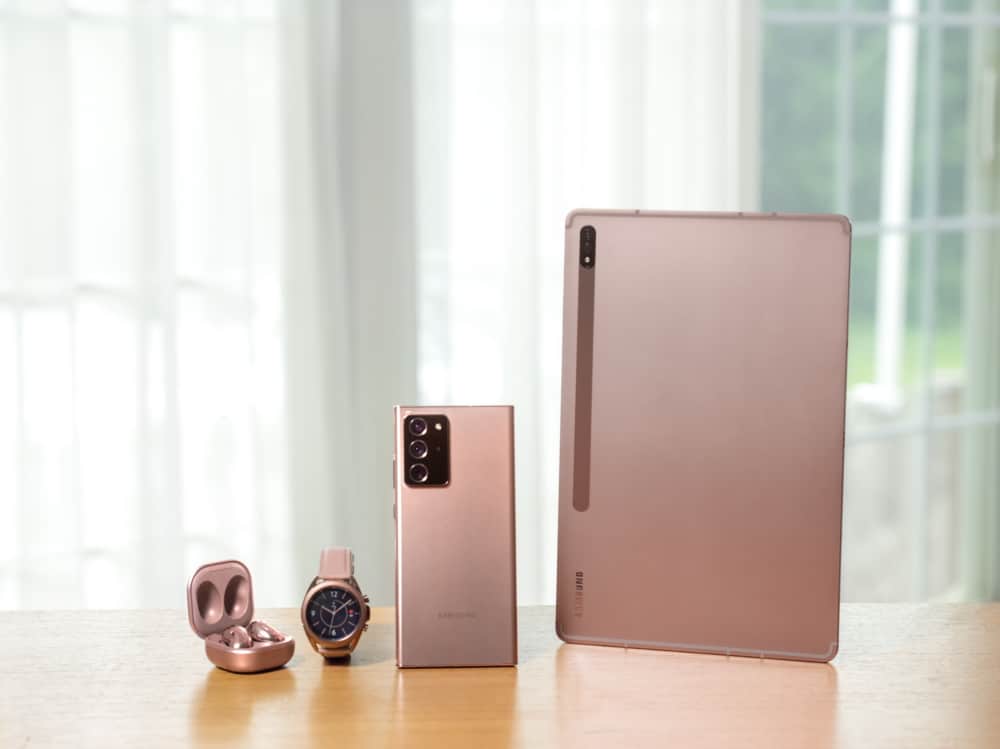 Samsung Electronics hosted its first-ever, virtual Galaxy Unpacked 2020 event livestreamed from Korea to introduce a new suite of power devices. The event is significant as it comes in the midst of the global pandemic. In preparation of the neo normal, Samsung used the Galaxy Unpacked platform to focus on driving purposeful innovations, operational agility, and strategic collaborations for the consumers.

As Dr TM Roh, President and Head of Samsung’s Mobile Communications Business mentioned in his blog, in the run-up to the Galaxy Unpacked event:

“I consider this new era as the “Next Normal” and technology – especially mobile technology – has a critical role in it. In just a few months, we’ve seen our lives change in unimaginable ways. Distance learning, at-home fitness, online concerts, and so much more have all been enabled by mobile technology.

As leaders of the tech industry, we have a special responsibility – and now a true sense of urgency – to help society continue to move forward. So many people are counting on us to give them new ways to communicate, new ways to work, and new ways to connect.”

Throughout the Galaxy Unpacked, Samsung’s focus for purposeful, agile innovations, backed by strong ecosystem collaborations came forth. Samsung debuted some widely-speculated and powerful devices for the neo normal.

The Note20 and Note20 Ultra

Samsung continues with its dual-variant strategy, aimed at enhancing productivity, efficiency, and elevating performance – at work and while at leisure.  With the larger screens and S Pen, the Note20 series is squarely aimed at enterprise users. Unlike a year before, the new Note20 series are strikingly apart in terms of the specs they pack. With the Note20 Ultra, Samsung offers a higher-end camera system, as compared to the regular Note20.

Both the devices come with a newer Qualcomm Snapdragon 865+ SoC. The upgraded Qualcomm® Kryo™ 585 CPU on the 865+ delivers up to 3.09GHz and the Qualcomm® Adreno™ 650 GPU offers up to 10% overall performance boost compared to the Snapdragon 865.

From a user experience perspective, the S Pen has significantly improved in its input latency, translating in layman terms, into a much-better, fluid writing experience. What Samsung has accomplished is to reduce the input to photon latency, into as low as 9ms latency on the Note20 Ultra. This is made possible through a smart use of machine learning input prediction techniques. In addition, the 120Hz display on the Galaxy Note20 Ultra’s display enhances the experience even more.

With the Anywhere actions on the Note20 series, the capabilities offered by Air Actions are further built upon. Users are now able to customize new actions for Back, Home, Recent App, Smart Select, and Screen Write.

The Samsung Notes app features auto-save and syncing capabilities, that allow users to capture, edit, and share ideas across phone, tablet or Windows 10 PC. The vision of Dr Roh on providing a more integrated experience comes to life.

Dr Roh’s comment on ‘strong ecosystem collaborations’ is embodied in its partnership with Microsoft. Samsung’s Microsoft integration, for instance, is vastly improved upon this year, enabling users to have more seamless experience and productivity flows across phone, tablet and Windows 10 PC. With Microsoft’s Your Phone app and Link to Windows integration, users can sync their Galaxy smartphone to their Windows10 PC to share messages, photos, notifications and calendar reminders in almost real-time. In addition, users will soon get the opportunity to run multiple apps side-by-side on the Windows 10 PC. All these integrations make the Note series attractive to enterprise power users.

It is not just all about productivity. When it comes to content creation, content consumption and gaming, the Note series is powerful.

Take, gaming, for instance. The Note20 series  with its AI game booster, Bluetooth audio response optimization, larger immersive display, and 240Hz touch latency on the Galaxy Note20 Ultra taking the gaming experience to a whole-new level. Further, Samsung’s Microsoft partnership translates into users getting to play over 100 Xbox games, including hits like Minecraft Dungeons, directly from the cloud, on their phones with Xbox Game Pass Ultimate, beginning September 15.

Samsung’s Nearby Share on the Note20 Ultra is powered by UWB (Ultra Wide Band).  This translates into quick and easy sharing on the Note20 Ultra and other UWB-equipped galaxy devices.   It also offers improved location services, and enables AR and IoT applications.

The “Super-Fast Charging” capabilities on Samsung charges up to 50% in just 30 minutes.

The Samsung Galaxy Tab S7+ tablets come with 12.4” Super AMOLED display with a 120Hz refresh rate, while the Galaxy Tab S7 features a similar 11” display– both supporting a 16:10 aspect ratio picture. Both the tablets feature the same Snapdragon 865+ SoC as the Note20 series.

‘Operational agility’ is key in the neo normal, and the tablets are equipped to work seamlessly with other Galaxy devices. 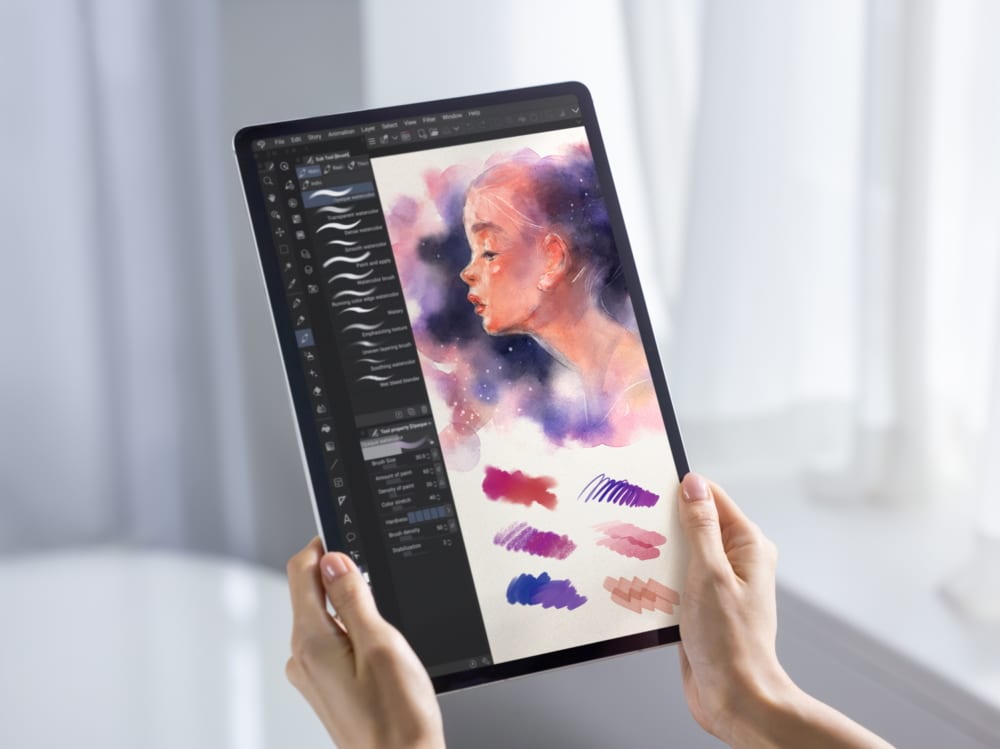 Both S7+ and S7 enable PC-like productivity, and are great for content creation, content consumption and gaming as well.

For the content creators, the S7 and S7+ come with S Pen and access to creativity tools, such as Canva and the popular drawing app Clip Studio Paint.

Both S7+ and S7 come with four months of free YouTube Premium, offering users access to ad-free and uninterrupted content. Plus, access to Netflix and Spotify through Finder search. The immersive display on the tablets enrich the viewing experience.

Samsung’s partnership with Microsoft means users of S7 and S7+ get to enjoy over 100 Xbox games from the cloud, via the Xbox Game Pass Ultimate. 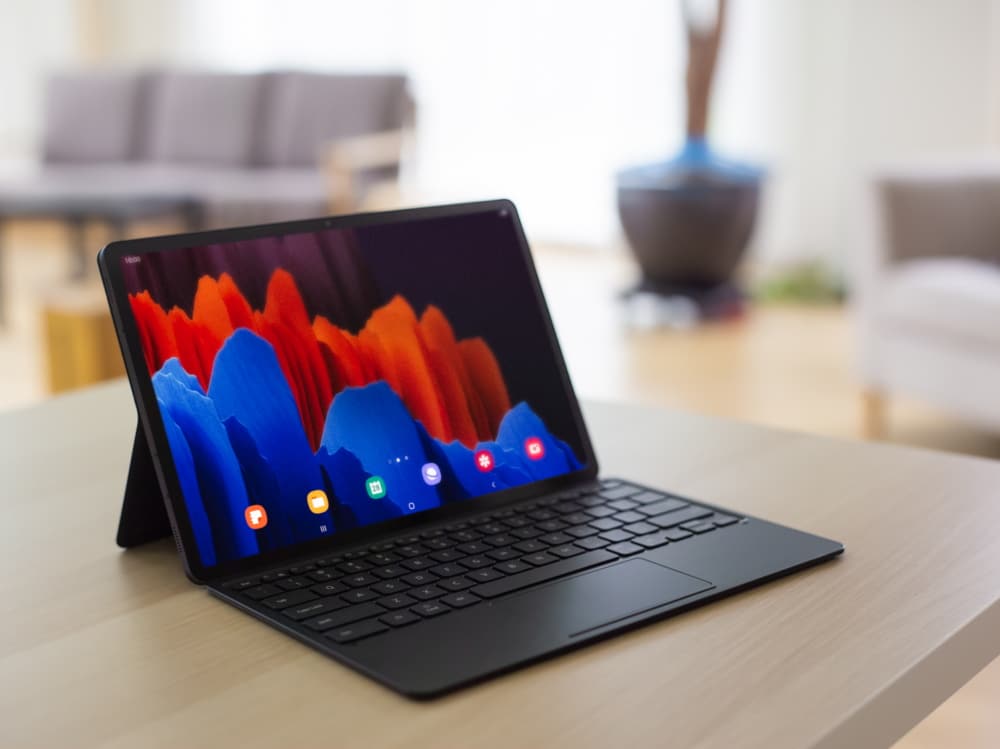 Outside of the powerful Apple iPad, the Samsung Galaxy tablet is one that imparts a similar level of power, productivity and efficiency.

The Galaxy Watch3 from Samsung is a remarkable and bold play around health and wellness.

Thus far, Apple was one player that took extraordinary strides with its relentless focus on  health and wellness monitoring. While many Android brands have debuted their IoT play, with a focus on smart watches as well, none have embodied a similar or same level of play around healthcare, like Apple has. 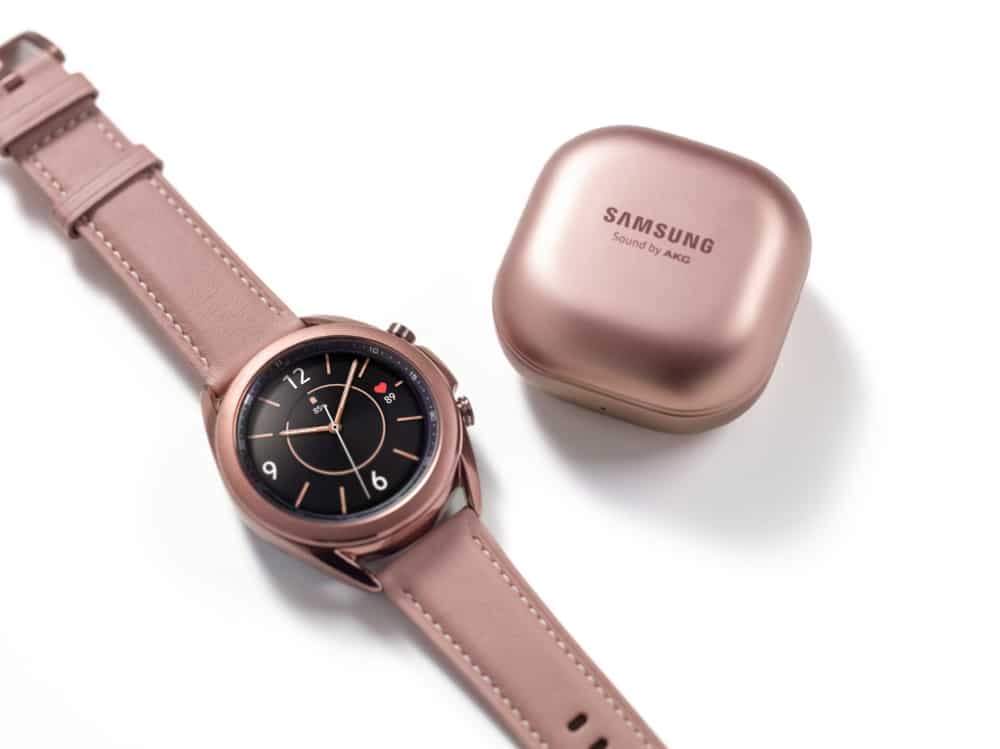 The new Samsung Health Monitor app, once launched, will have Blood Pressure (BP) monitoring and electrocardiogram (ECG) readings. This is currently available only in Korea,  where regulatory clearance has been provided.

In addition, the Galaxy Watch3 takes a leaf of Apple playbook, and comes with a new feature that detects falls, which identifies a potential fall and can send an SOS notification to chosen loved ones.

In a homebound economy, Samsung Health offers >120 different home training programs for those who seek to be fit, enabling them to track their workout progress on their watch.

In comparison to the original Galaxy Watch, Galaxy Watch3 is 14% thinner, 8% smaller and 15% lighter, and comes with a larger display. It is available in both LTE and Bluetooth variants.

At the Galaxy Unpacked 2020, Samsung also debuted its stylish and ergonomic earbuds, Galaxy Buds Live, that come with three microphones for improved voice pick-up. The Galaxy Buds Live feature active noise cancellation for open type, that allows one to tune in (or out) of the world. For instance, one can tune out distractions, and still have the ability to tune-in into conversations with loved ones, or other announcements elsewhere.

When compared to the earlier Galaxy Buds+, Samsung Galaxy Buds comes with a bigger 12mm speaker and bass duct. This translates into richer and better sound quality. 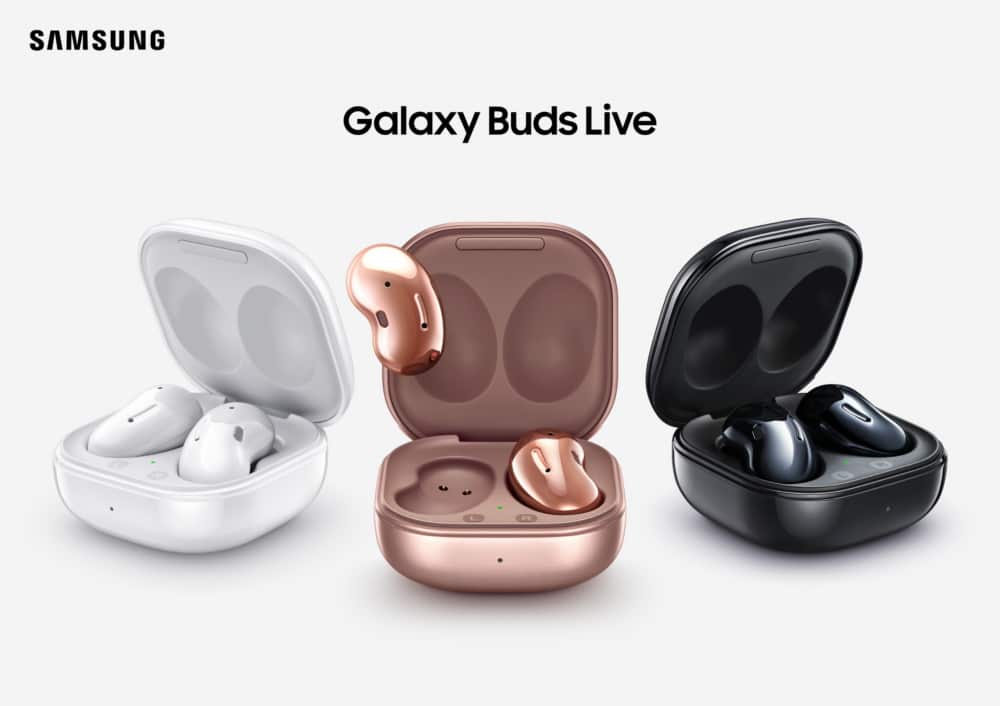 The Galaxy Buds Live come with Qi-certified wireless charging, and a long-lasting battery life. When fully charged, they can support up to 6 hours of playback, and the charging case allows one to enjoy an additional 15 hours over multiple charges.

With purposeful and breakthrough innovations, Samsung has been able to foster the next generation of mobile devices – foldables. While there were some teething problems with the first generation foldable, Samsung proactively worked on it, and was able to marry technological marvel with style in the Galaxy Z Flip.

As a pioneer in foldables, Samsung continues to foray ahead with its brave, bold bets on foldables. In its third, or fourth outing, Samsung has acted upon user feedback and request for features and upgrades on its earlier foldable devices. 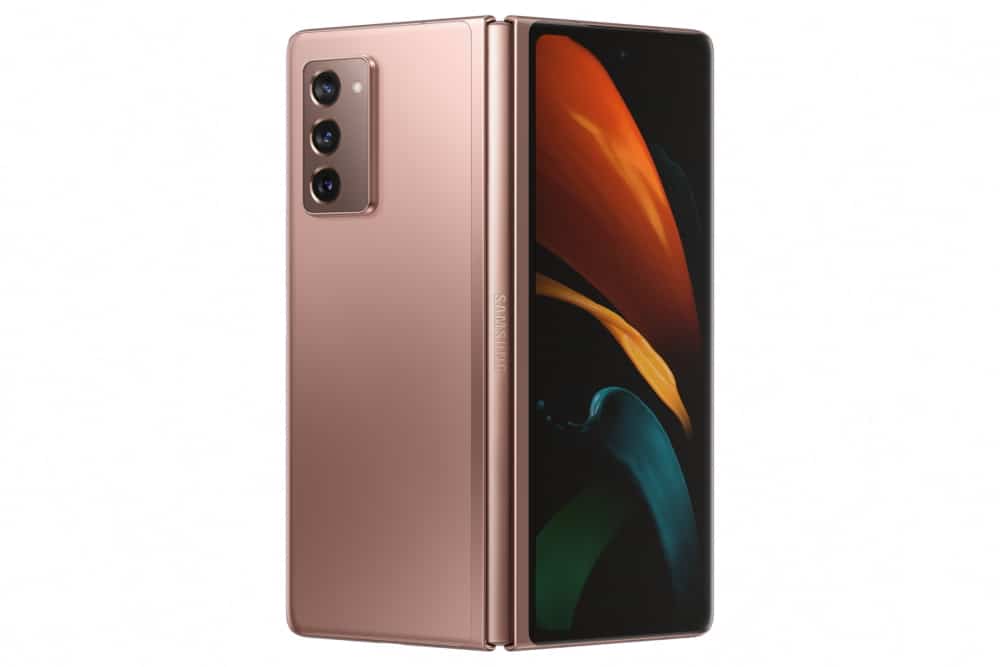 In the neo normal, mobile is central to consumer lives. It not enables them to communicate, but accomplish much, much more.

As Dr Roh mentioned in his blog:

We’ll continue to expand the Galaxy ecosystem and deliver experiences that help you do more with less so that you can focus on what really matters. Ultimately, it’s about putting you at the center of the Galaxy experience so you can live life to the absolute fullest.

The new additions to Samsung’s family at the Galaxy Unpacked come at a time when consumers seek powerful devices, at home, to settle into the neo normal. The latest Snapdragon 865+ alongwith 120Hz in the Samsung devices offer an enduring appeal and promise for early tech adopters seeking to upgrade. The 5G support on the new devices, show how far we have come with 5G – it is now very much a mainstream, good-to-have feature.

True that, 2020 is a difficult year for the mobile industry in the midst of a global humanitarian crisis owing to the pandemic. Yet, I believe in the promise that these new devices unveiled at the Galaxy Unpacked hold. While conventional wisdom would have meant focusing on driving affordability, Samsung gave it an amiss. From consumer point of view, those seeking to upgrade during the festive season will find these devices and the close-knit collaboration experiences therein, appealing. It is pertinent to note that the consumer cohort that Samsung is playing to, with its foldable and the Note, is not one affected by the pandemic. 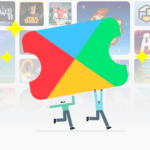 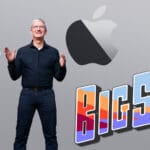