Samsung’s third generation foldable phones are truly at the threshold of mainstreaming foldable adoption. Since they first made their debut in 2019, Samsung has been able to rapidly scale-up the new foldable technologies, with features such as enhanced durability and water resistance to make them much more attractive to a wider audience in 2021. All along, as an early tech adopter, I have been enthused and excited about their potential and promise. While some tech giants hedge their bets on new form-factor innovations and features, Samsung has shown remarkable perseverance in pioneering foldables, and with success too. The new Galaxy Z Fold3 5G and Galaxy Z Flip3 5G represent two distinct product lines and aimed at two clear consumer demographics. The Fold3 is a multi-functional productivity powerhouse. The Flip3, on the other hand, is a cool/cute and definitive lifestyle statement, plus a guaranteed head-turner. Samsung has stayed consistent with the overall design aesthetics, and merely been persistent in tweaking features to address consumer concerns, and consistently appeal to potential buyers.

In the smartphone sea of sameness, many OEMs have been seeking to differentiate themselves on features or by championing new device form factors. Whether it be Royole or Microsoft, Huawei or LG, all have been focused on reimagining the rectangular slab. However, Samsung has been persistent in championing the foldable phones.

Over the past three foldable generations, Samsung has shied away from undertaking cosmetic changes, and rather focused on enhancing software, and specific feature sets (including durability, water resistance, and under-display camera, among others) to make the foldables accessible and attractive to a much larger audience, beyond the early tech adopters. In doing so, it has incorporated continuous consumer feedback and suggestions.

The introduction of a Galaxy S Pen Fold Edition with the Samsung Galaxy Z Fold3, for instance, gives a further boost to productivity and creativity use cases. The S Pen Fold Edition is pretty nifty, with its redesigned tip that is gentle to the Fold’s display. Unlike others, I do not believe that the inclusion of the S Pen is a definitive comment on the future of the Note Series. On the contrary, this is a move that will make the Fold3 attractive to Samsung loyalists, as well as to other always-on-the-go productivity enthusiasts. 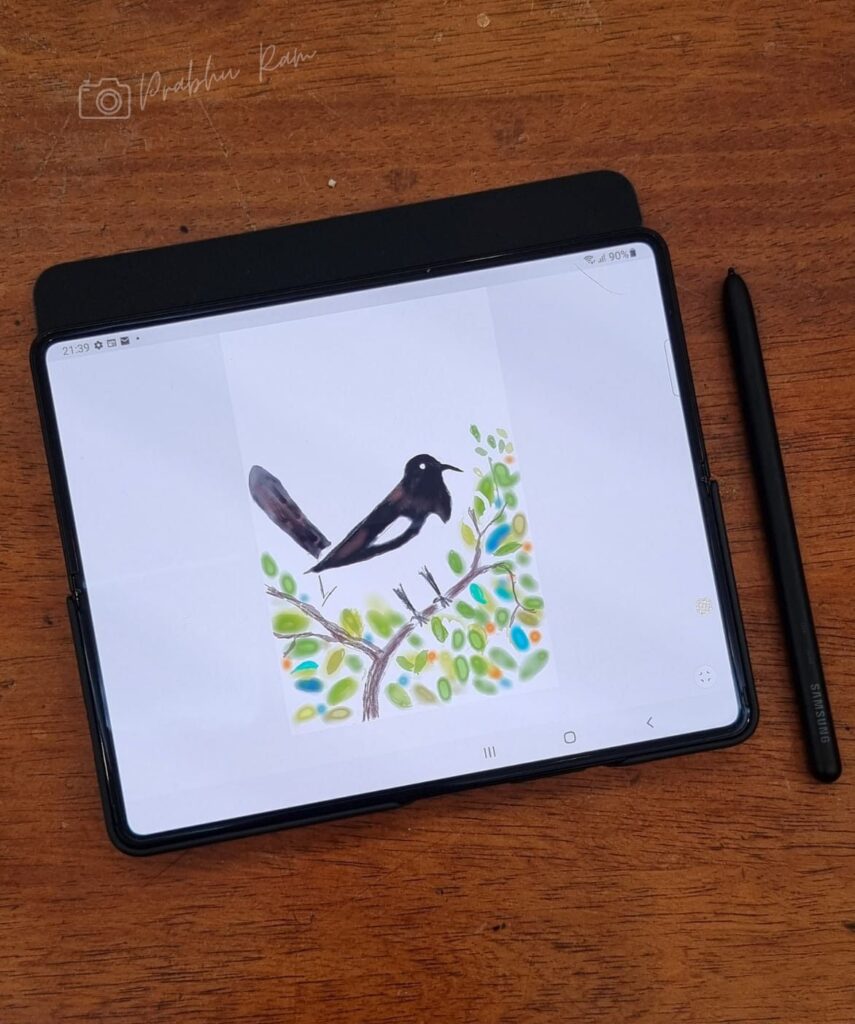 The new IPX8 water resistance rating is a significant and welcome upgrade. In my time with the Galaxy Z Fold3, I have been able to literally take the Fold3 into the swimming pool, answer calls, or click photos, without getting concerned about water damage. If that sounds extreme, this is the first foldable I have been comfortable getting drenched with in the torrential rains of New Delhi.

While the device is not dust resistant yet,  this would be something we can anticipate as a feature set in the upcoming foldable generations from Samsung.

With the under-display cameras on the Fold3, Samsung has been able to make distraction-free, immersive experiences a reality across use contexts, including productivity, content creation and consumption. 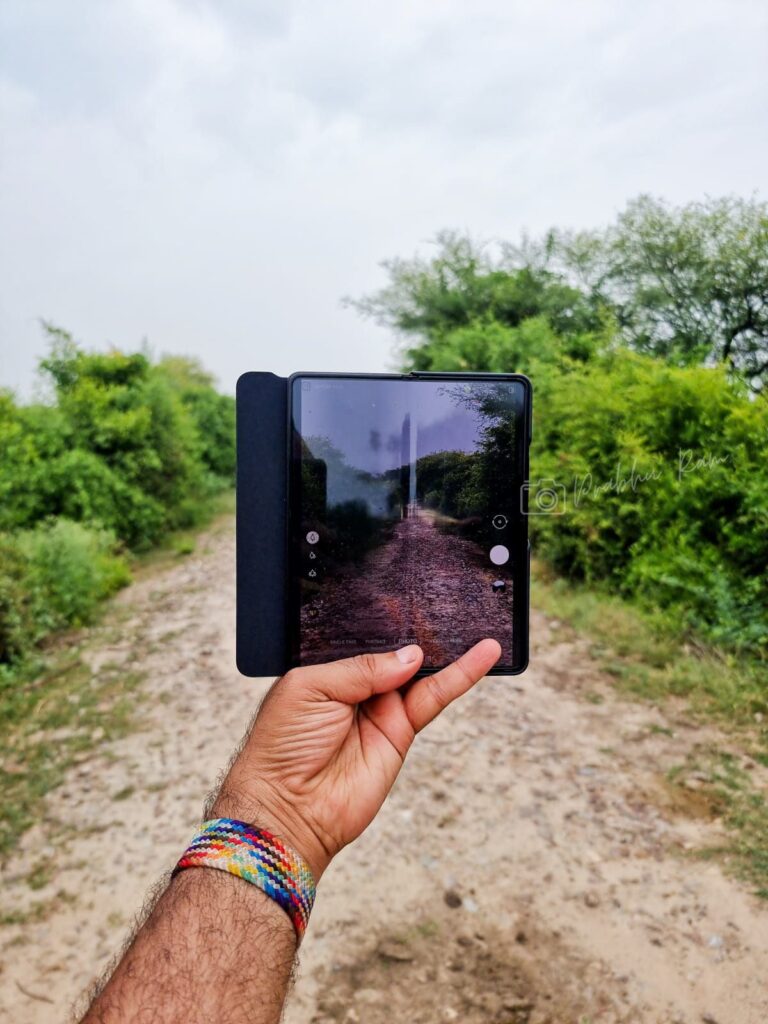 The Galaxy Z Flip3 5G, as mentioned earlier, is a real stunner. It is a perfect union between form factor and functionalities. The Flip3 is exquisitely designed, with a much-improved hinge, and most importantly, with its beautiful and bright OLED cover display. This is a useful and nifty feature that helps one navigate all the major phone functions without having the unfold the device. Compared to the original Flip, this is a significant upgrade. The cameras on the Flip are flagship grade, and compares well with other smartphones in the market.

What’s remarkable about the Flip3 is how effective it is for an array of use cases. Use the ‘Flex Mode’, and voila! Hands-free Group Selfie. Check. Zoom Calls. Check. Dashcam. Check. Gaming. Check. The external camera can also double-up as a viewfinder to make better selfies happen. Thanks to the Flex Mode, the Flip3 is a useful tripod for the times we live in. The Flex Mode essentially splits the foldable screen into an L-shape (akin to a laptop), wherein one can move the video to the top and keep the shutter button, or other playback controls at the bottom.  This, in turn, makes all the use cases mentioned above possible!

The app ecosystem has also gained maturity since the last time Samsung debuted the foldable, and it makes the overall experience more satisfying. 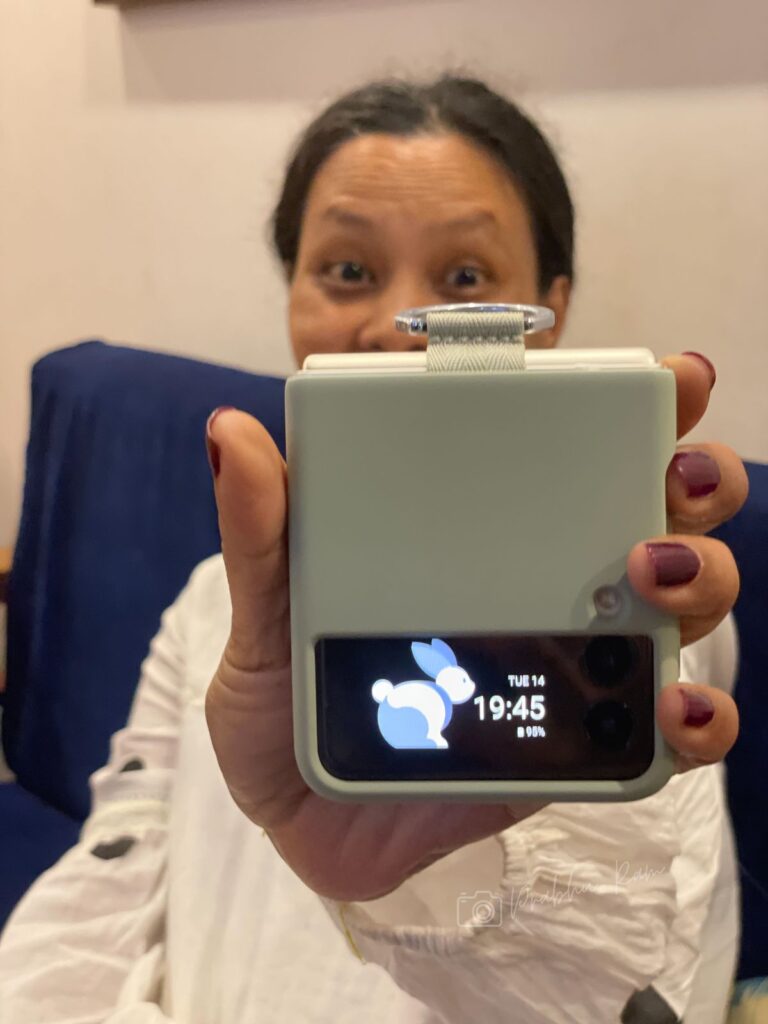 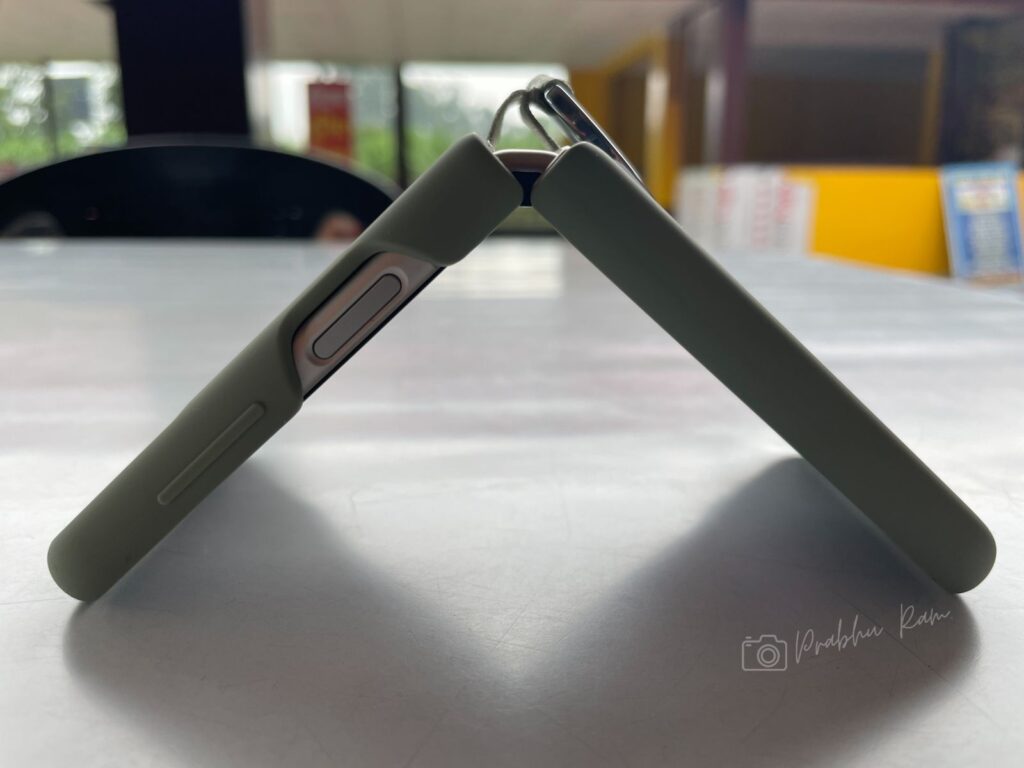 The performance on the Flip3 is smooth and on par with what other Android flagships offer. Also, the audio quality is satisfying with the stereo speaker set-up. There is a front-facing speaker on the earpiece, and a bottom-firing speaker near the USB-C port. 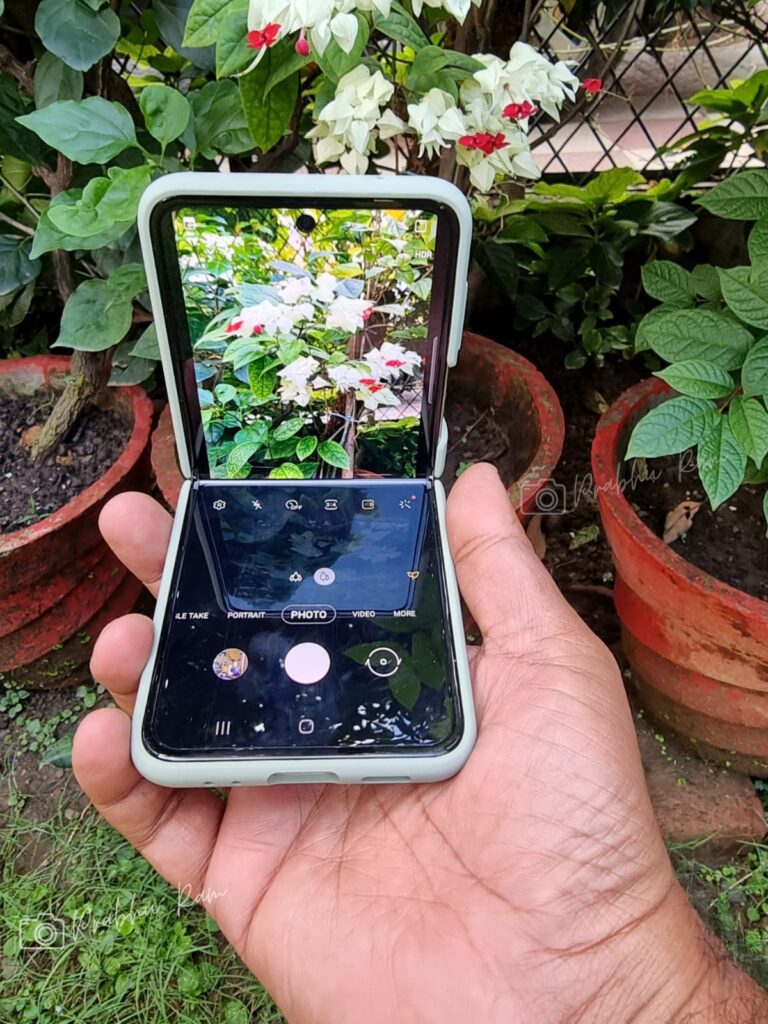 Most importantly, the Flip3 shares the IPX8 water-resistance rating that the Fold3 has: upto 5 feet (1.5 meters) of water for upto 30 minutes. Its features such as these that would be compelling enough for a mainstream audience to embrace foldable devices. 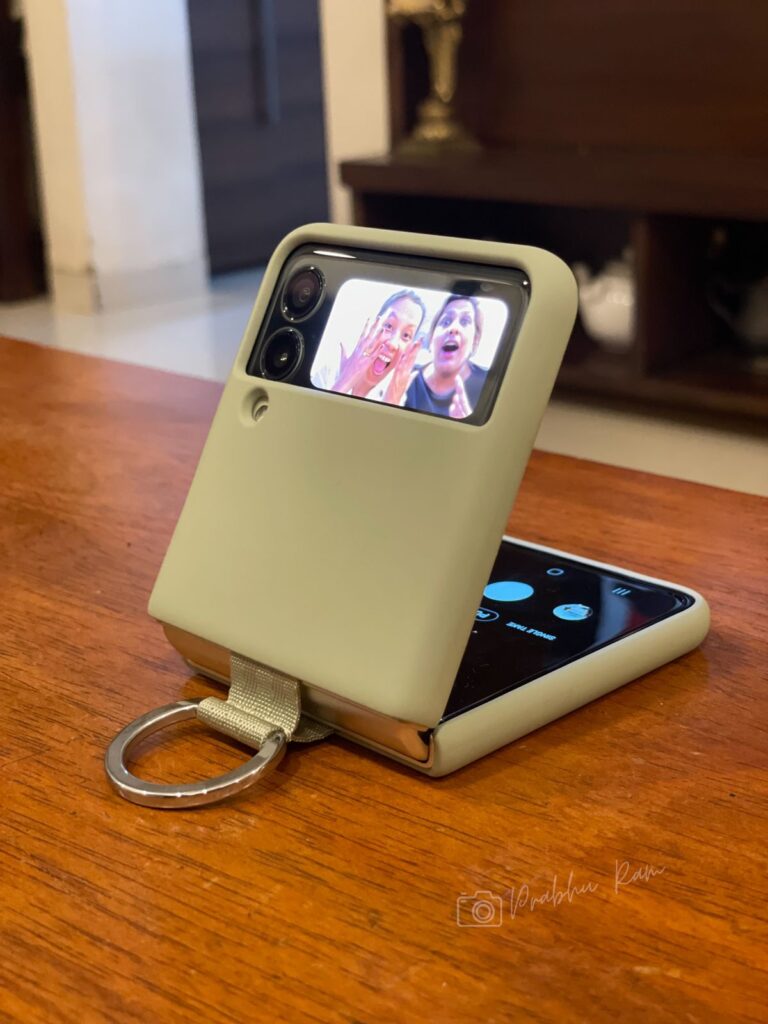 All the enhancements from Samsung in the Galaxy Z Fold3  5G and Galaxy Z Flip3 5G are exciting and make the foldable an attractive proposition for a wider audience than merely the early tech adopters. The Flip3, as a device, is already primed for mainstream adoption. Based on the anecdotal evidence that I have gathered, via my interactions with loved ones and those in my social network, the reaction to the Flip3 has always been invariably marked with a wide-eyed surprise and enthusiasm.

As smartphones increasingly become a testament for consumer lifestyles, foldable devices, such as Samsung Galaxy Z Flip3 are an attractive proposition. For me personally, always-on-the-go professionals would be able to benefit from the productivity and creativity use cases that the Fold3 makes possible, with the S-Pen Fold Edition.

Am excited about today, and more so, the future.