Skip to Content
Home Showcase Viewpoints With the Galaxy Z Flip, Samsung asserts its leadership on Foldable smartphones
by

At its Samsung UNPACKED event for 2020, organized at the Palace of Fine Arts on February 11, 2020, Samsung unveiled the all-new Samsung Galaxy Z Flip, alongside the Samsung Galaxy S20 Series. If the Samsung Galaxy Fold was all about showcasing Samsung’s technological leadership in display and design engineering, the Samsung Galaxy Z Flip is all about taking it to those consumers who matter – the style conscious, tech savvy, social networking generation, or Gen Z, like Samsung defines them. The Z Flip is a testament to Samsung’s leadership in developing and nurturing the foldable smartphone segment, and comes with a more wider ‘wow’ appeal than its predecessor. A case in point: Samsung upped the wow quotient, by teaming up with fashion designer Thom Browne to launch a special edition of the Galaxy Z Flip.

Despite all the media criticism – warranted and unwarranted, and all the lessons learnt from its first outing with the Galaxy Fold, Samsung has leveraged all its learnings and experience from the Fold, to double down with an exciting new device proposition.

Learning from the Galaxy Fold

Almost a year ago, Samsung debuted the Samsung Galaxy Fold at the Bill Graham Civic Auditorium in San Francisco. The premise was to revolutionize the smartphone market with a device, that was in absolute sharp contrast to the countless iterative and incremental innovations that plagued the smartphone market. The Fold represented a bold, brave risk on part of Samsung, to offer a technological offering that was not witnessed before. Just like all first generation innovations, the Fold ran into problems, with its folding screen, unstable applications and delayed launches.
When the Fold debuted, there was no race for first past the post with its foldable smartphone. Samsung was prudent in not going ahead and delivering a flawed product, but rather focused on ensuring highest consumer experience when the device actually went on sales. At that time, I had emphasized that, the first generation of an innovation is always experimental, and which over successive iterations achieves perfection. The Galaxy Fold was just a mistake in timing. It does not take away anything from its manufacturing capabilities. Unlike the ambitious and experimental first generation iterations, the second-generation of foldable devices are always way better.

In fact, its second generation variant, released later in the year, proved more robust than anticipated, and was received well on debut in the market.

What the Galaxy Z Flip debut has demonstrated is that we are now in the midst of experiencing a watershed moment in foldable smartphone innovation, almost as memorable and akin to the debut of the iPhone that revolutionized the smartphone industry a decade ago. Over the coming decade, the foldable smartphones will continue to see iterations and innovations, and appearing across not just premium, but mid-range devices. While Samsung’s initial foray into foldables looked like a mere short-lived phenomenon, the Galaxy Z Flip reaffirms that we are looking at an innovation that will thrive, with devices that fold in more ways than one.

Going forward, the smartphone industry would have to focus on standardizing software applications and optimizations to ensure a seamless, intuitive experience for users.

From Fold to Flip – The Galaxy Z Flip

A year in the smartphone industry is not too long a time to refine and scale-up a product. Except, Samsung proved that it is, with its Galaxy Z Flip. 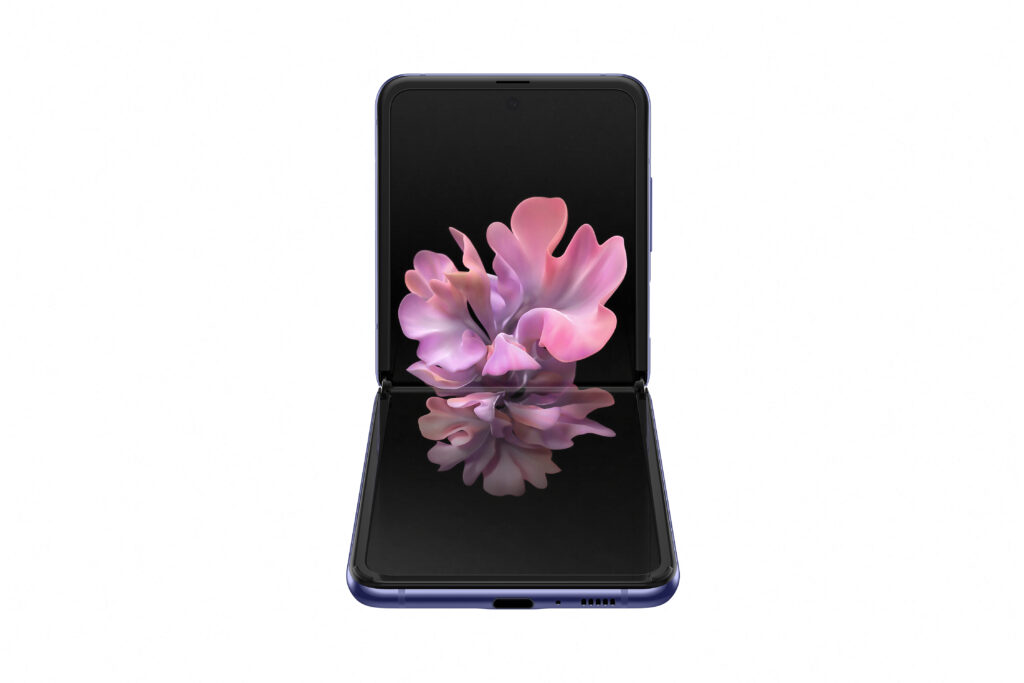 With increased technological maturity, Samsung has been able to bring down the price-points to more affordable levels. This, in turn, augurs well for making foldable phones more mainstream in the near future. At its price, the Z Flip compares well, and is even cheaper than some other Galaxy S20 variants. In addition, Samsung has been smart in clearly defining use cases and contexts for the Flip’s intended target audience. 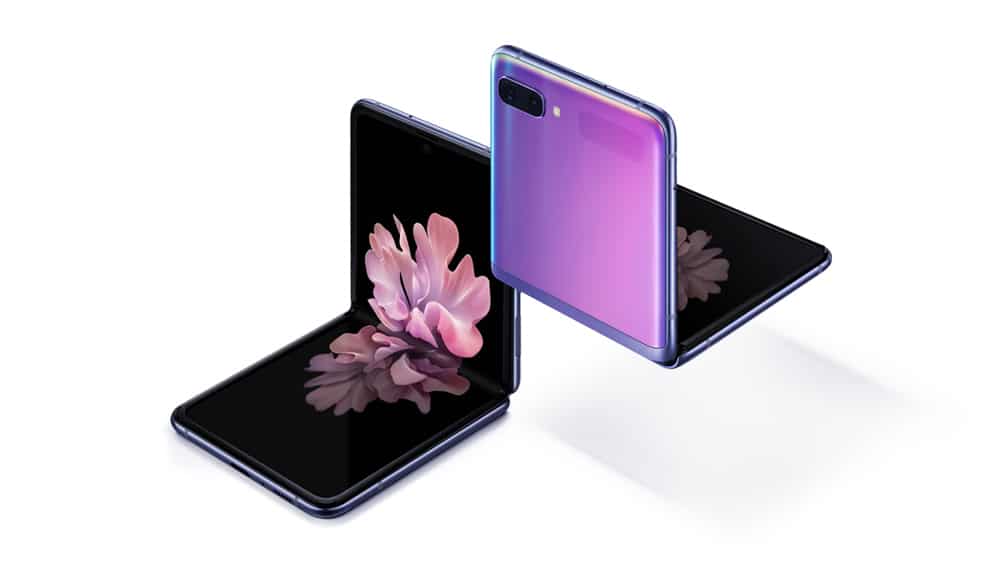 Whether it be folding glass that protects the display on the Z Flip, or the hinge design, or, for that matter, the overall design language – Samsung has delivered beyond measure.

Talking about the glass display cover, it marks a significant, and I must add, impressive progress over the earlier generation foldable phones that had a protective plastic cover, and which in turn, was the causative agent for many problems. While the resolution on the Z Flip is average at 2636 X 1080, it has an edge over the earlier Fold, or the recent, Huawei Mate X. The device is the only such device in the market that comes with an ultra-thin foldable glass screen. Unlike plastic, the glass screen will be more scratch resistant and would mean more long-lasting. In short, the new Flip is more durable and has a better feel, than others, and can survive 200,000 folds, according to Samsung. 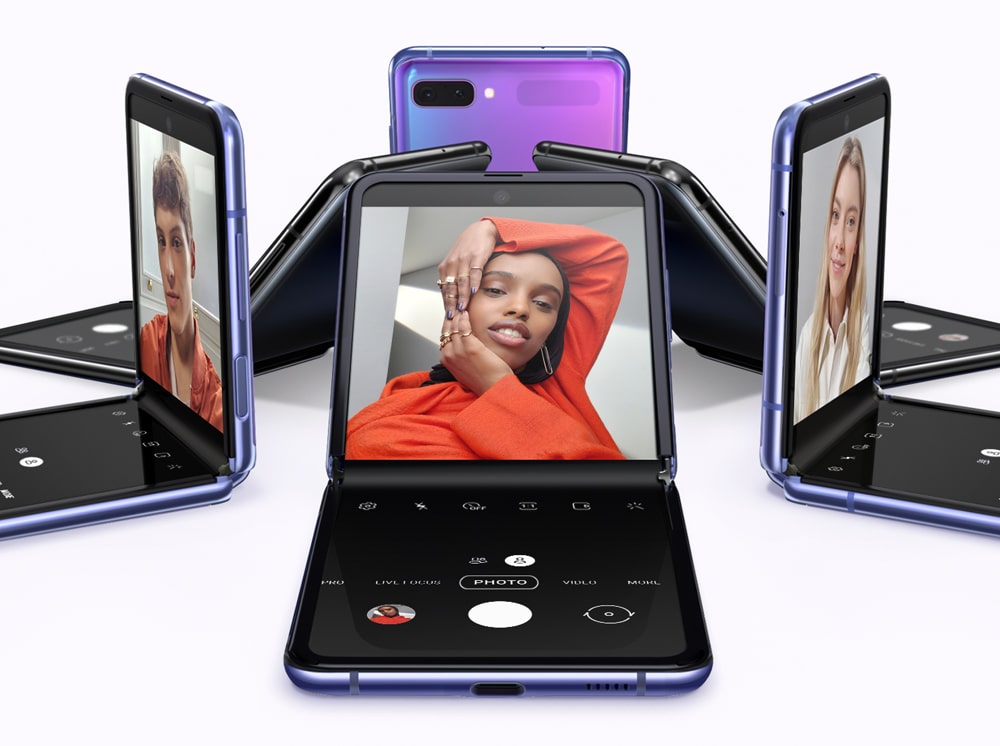 In the Galaxy Fold, the hinge was a major source for a lot of the problems. With its new Hideaway Hinge, Samsung has used nylon fibres crafted by micro-height-cutting technology to repel dirt and dust. In addition, the hinge is designed such that it also acts like a laptop hinge that one can open and prop at different angles, and can take photos at different angles.

While the Galaxy Fold aimed at turning a phone into a tablet (and which made sense for those professionals who are on the go, as well as an premium enterprise offering for sectors, such as hospitality), the Galaxy Z Flip looks at making the foldable phone pocket-friendly. The Flip is akin to a regular smartphone, that comes minus the ugly bezels and notches. In its closed condition, it is a stylish, compact palm-sized device, featuring a tiny 1.1-inch OLED cover display to show notifications. When unfolded, the Flip’s screen size nearly doubles to reveal a stunning 6.7-inch OLED display with a tall 21.9:9 aspect ratio. It’s a device that can be propped up to take hand-free selfies, in a partially unfolded state.

There are two 12MP cameras on the back, a regular wide angle and an ultra-wide angle, On the inside, the Z Flip sports a 10-MP selfie camera cut out in the top of the display. The Z Flip supports wireless charging and runs a customized version of Android 10.

Flip Vs Fold – What’s Next?

So, what does the Flip’s debut mean for the Fold? Samsung’s playbook has always been to offer choices for buyers with a differentiated product strategy. So, one can definitely anticipate new Fold successors to debut in the year ahead.

While the Galaxy Fold could potentially see more enterprise adoption, and Samsung has a good opportunity to position it accordingly, the Galaxy Z Flip has an out and out consumer niche, especially content creators. Just like the Galaxy S and the Galaxy Note series, the Fold and Flip could continue to exist independent of each other, and debut in Spring and Fall seasons.

In conclusion, the Galaxy Z Flip offers an exciting value proposition to energize and excite a market, where smartphone buyers are holding onto their devices for longer, than before. Samsung has clearly stamped its authority on foldable smartphones, and raised the benchmark far higher with its second outing. It leaves its competition far behind, with a device that is more refined, more exciting, and more compelling than any other.

While it still remains early days for the foldable smartphones, the Z Flip is a brilliant step forward by Samsung, that paves the way for some mainstream adoption, especially beyond early tech enthusiasts, and potentially by those who believe that their phone is an extension of their personality, and that offers something that’s not just ‘premium’ but ‘radically and refreshingly new’.